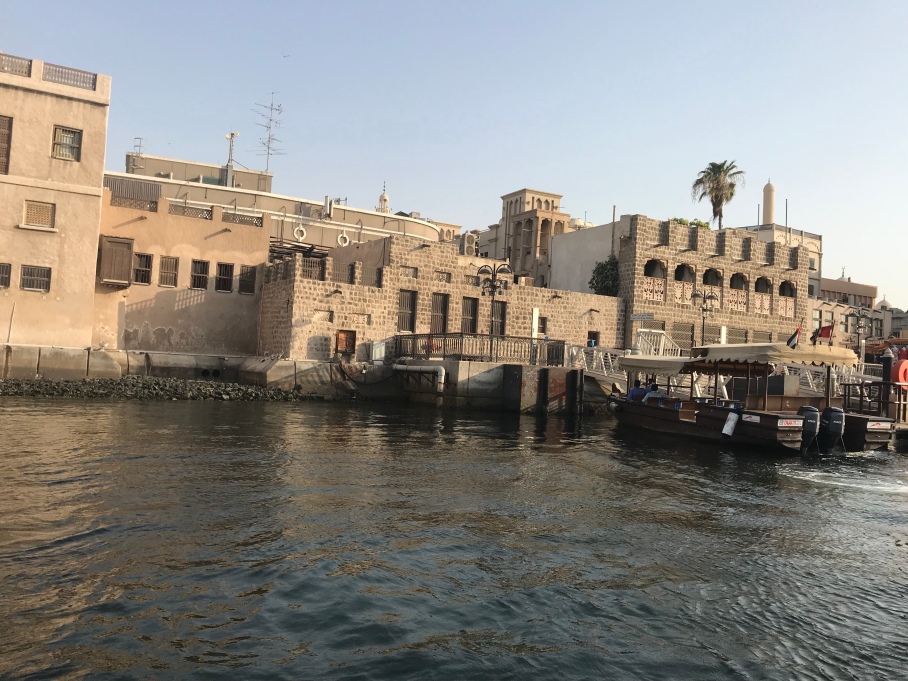 The contrasts are not just between old and new buildings, rich and poor people, heat of outside ( 38°) and air-conditioning of inside..there are many contrasts between what locals do, and where they shop and places for tourists, with contrasting prices as well!!

I like to think I act as much like a local as possible in most places, but is does get tricky when one is in a transit city after a 12 hour flight and one is very tired!!!

For example: like the locals, I recharged my Nol card in the ticket machine, ( approx$7) with local money from an ATM, before catching the auto, driverless train to my hotel.

The trip went well, I got off at the correct station ( world trade centre) , shunned the suggested taxi ( I could see my hotel in the near distance) and walked the 10 mins to my cool ( temperature wise) hotel!

But having booked in 6 hours earlier than check in time at 7:30 am( no problem Madam) , to my very reasonably priced hotel Ibis, I then blew all my good work by being a tourist and buying the $22 hotel buffet breakfast! Because I was tired and hungry and jet lagged!!

After a restorative breakfast, shower and sleep, I then headed out for an afternoon’s exploration of the older area of Dubai, some souks, the Dubai creek and just a general wander around. Last time in Dubai, I went up the tallest building in the world, went for a desert safari and dinner and visited a couple of upmarket shopping malls.

So off I went, and just before the Gold souk ( souq) , I was hungry again!! Ah, some local dates and almonds would be good! I popped into a little shop which sold both( and Saffron madam!) , But obviously for gullable tourists and the charming man tried to convince me I needed 1 kg of each!! “Oh no, just a little please, ” I said, “just 100 gm of both”. Somehow or other I ended up with far more than 100g, but thankfully not as much as 500g!! He threw in some free chocolates(?) and asked for 250 madam! 250dirham!!! What? That sounds a lot, but I paid and left, and then discovered I’d paid $92!!! Thankfully, the dates are succulent! I hope that my family in London like dates and almonds!!!! ( The free (?) chocolates were delicious) 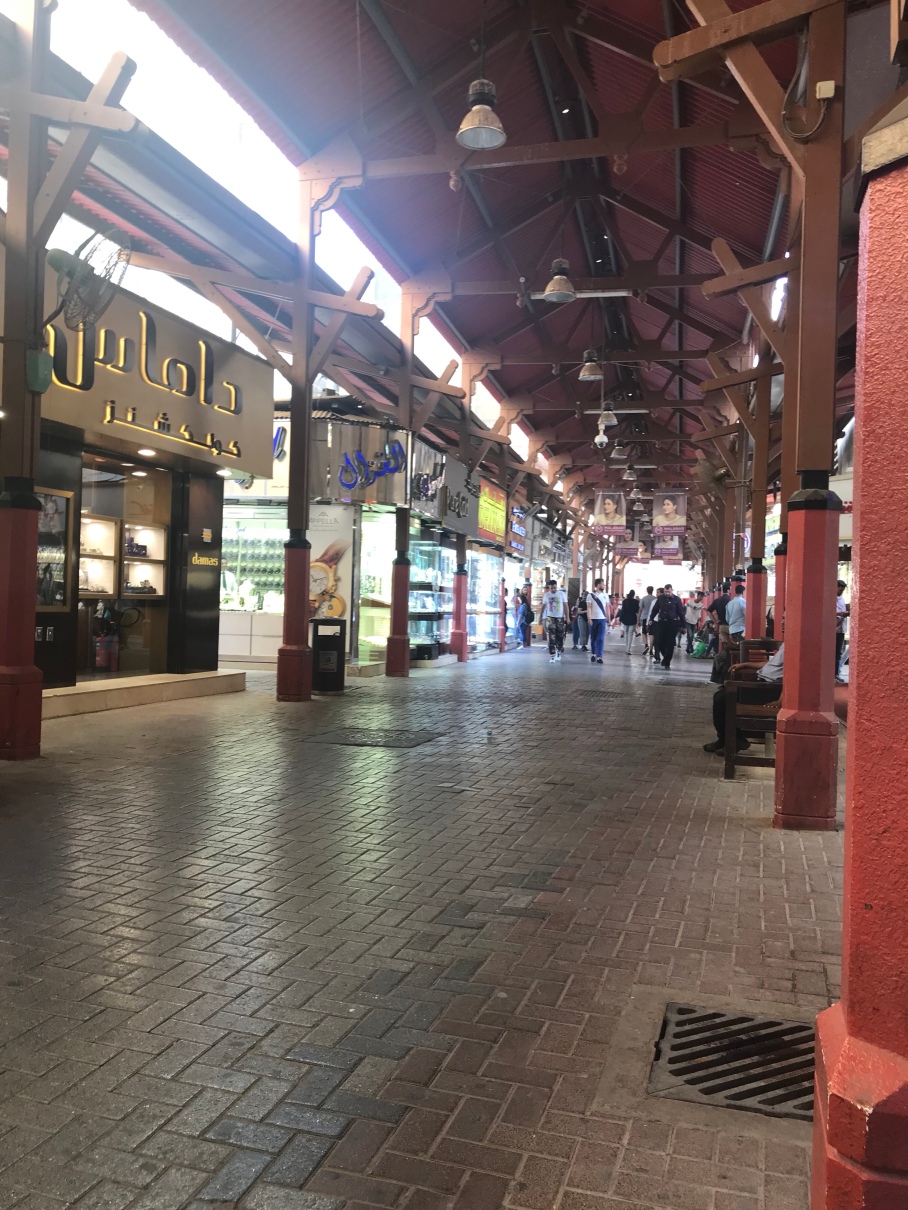 Later in my wanderings, I needed more water and I spied a little van being used by locals, some buying large (1.5 l) bottles of water…perfect! I asked for a large bottle of cold water and a banana, and the man asked for 250, madam! Surely not!! Is it because I’m not a local? Then the man next to me pointed to my 5 dirham note and said “that’s enough”. Oh, he meant 2.50! That’s better! For 92c, I had a huge bottle of water and a delicious banana! Yay! That’s more like it!

I’d read in a travel article, that the best way to cross Dubai Creek was to travel like the locals, on a little boat called an Abra, for the cost of 1 dirham (about 37c). So I did!

It was wonderful! As always, it was cooler and very pleasant on the water, and one got to see some of the older parts of the city. There are lots of Abra waiting and you are directed to which one is leaving next. When the Abra is full, it leaves!! It was a very pleasant 10-15 minutes. 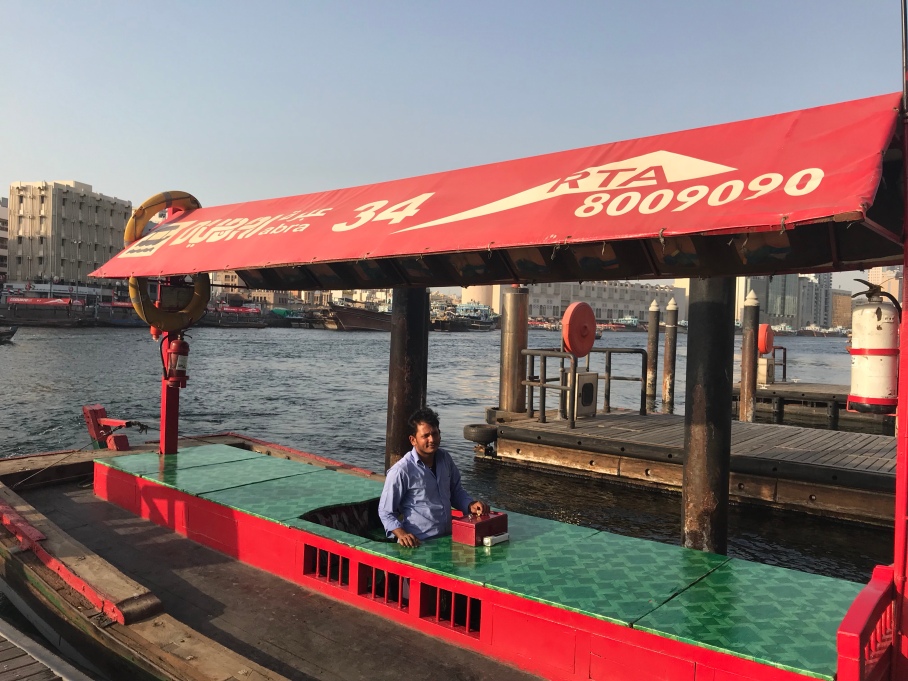 I then walked around the textile souk, where I got very expert at saying ” no thank you! ” “From Australia, yes, we have Kangaroos!” ” No , I don’t want a pashmina” All with a smile, of course! How exhausting!! 😊

3 thoughts on “Dubai: city of many contrasts.”